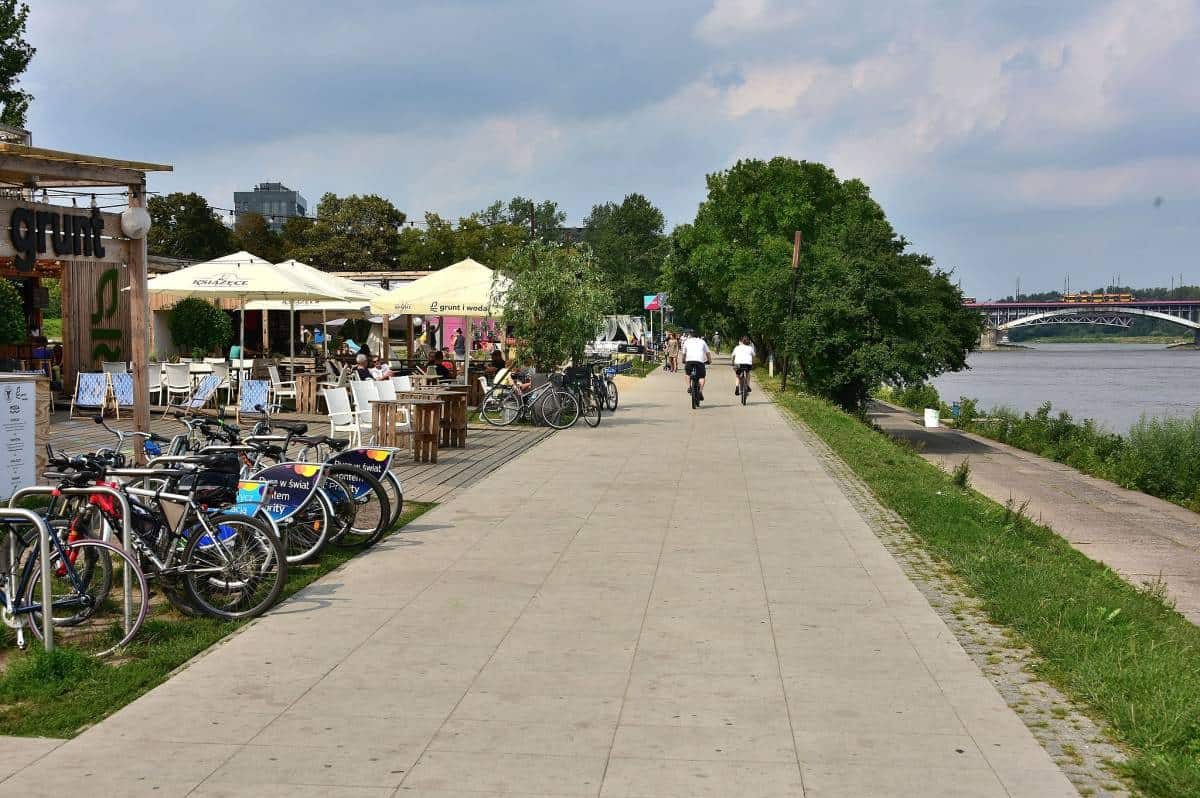 The following post is a detailed description of Vistula Boulevard in Warsaw. If you only need a touristic overview, we recommend clicking on the following link.

The Vistula Boulevard in Warsaw belongs, in our opinion, on the list of the most important attractions, although there is actually nothing to see here. It is true that the mermaid “Syrenka” stands here, the Copernicus Centre is even physically connected to the promenade and in the north, especially in the evening hours, one has a beautiful view of the façade of the Royal Castle as well as the burgher houses of the Old Town, but all this is nevertheless too little to be able to speak of sightseeing.

Here, however, you can see one thing above all: The life of the city and its inhabitants. When you walk along the boulevard, you are in the middle of it instead of just being there. Here you meet the tired office workers, the students relaxing from the lectures taking place in the neighbourhood, the workers having an after-work beer here after a hard day’s work, joggers, bodybuilders and occasionally one of us.

In our post you will learn more about the individual sections of the promenade. You will also find our TIPS in red. 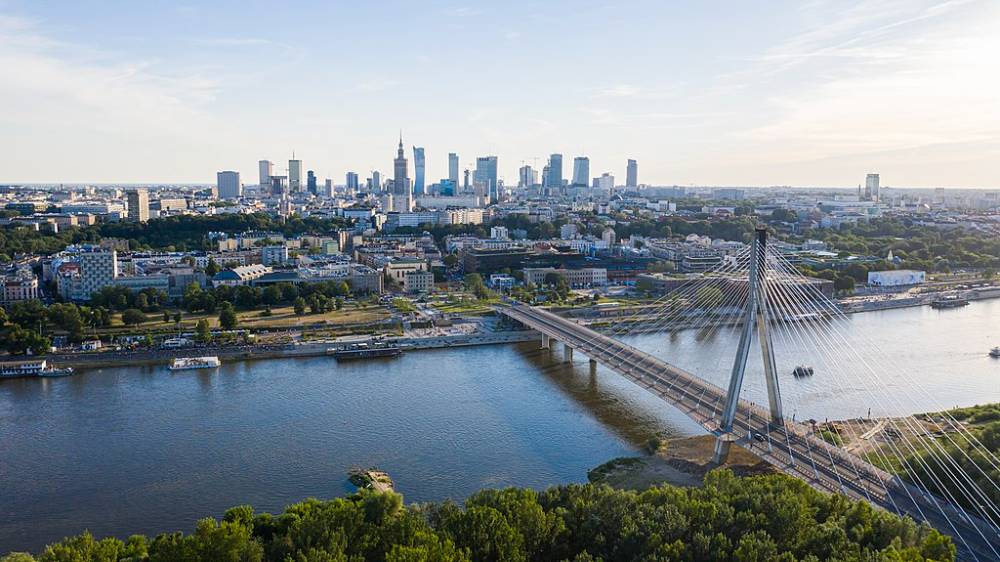 It makes sense to start with the Vistula before we move on to the details about the promenade. The Vistula is the longest river in Poland and also has its source and mouth here. It is also the largest river in the Baltic tributary basin. The three Polish capitals Krakow (capital until about 1598), Warsaw (capital since 1598) and Plock, which was one of the most important centres of power of the royal court in the 14th century (the travelling king / rex ambulans), are located at the Vistula river. In addition, numerous historically important events took place at the Vistula, which strongly influence the national consciousness of the Poles. Therefore, the title Queen of the Polish Rivers is only understandable. The total length is approximately 1047 kilometres, of which almost 31 kilometres flow through the Polish capital. In Warsaw, we are on the 500th kilometre.

When the water level is low, the depth is around 2 metres, but it can rise up to 7 metres. Locally, it has even reached 15 metres. The current is very strong, so it is not advisable to even think of jumping into the water. In the near future, 2 swimming pools are to be built, which is connected with the renovation of the left bank of the Vistula described below. The Vistula is not a small river in terms of width. In the Warsaw city area it is 400-600 m in the north and even up to 1.4 kilometres in the south of the city.

2017 Year of the Vistula river 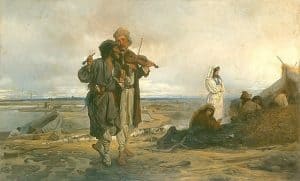 Rafting was one of the most important means of transport in the Kingdom of Poland. It was mainly grain and wood that was floated to Poland’s most important and largest port in Gdansk. The wealth and prosperity of the kingdom was largely dependent on the Vistula.

The raftsmen operated the rafting trade and enjoyed a relatively high reputation. Their tradition is still very much alive in 21st century Poland. The Year of the Vistula 2017 was created in their honour. It was to commemorate the 550th anniversary of the first free rafting.

Together through thick and thin. Warsaw and the Vistula 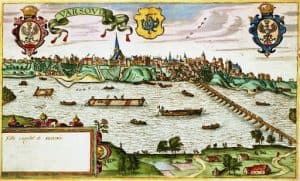 Warsaw near the end of the 16th century

Ever since Warsaw was founded, the Vistula has been inextricably intertwined with the city.

And so the first wooden bridge to the other side of the river was built at the level of Mostowa Street (googlemap) as early as 1568 – 1573. This connection was important because at the Union of Lublin in 1569 it was decided that Warsaw would be the city for all future Sejm sessions. The bridge was very narrow and therefore the crowding was also nerve-wracking at that time. An ice floe destroyed the bridge in 1603, which was one of the longest bridges of its kind in Europe at the time. All that remains of the bridge is the entrance gate at the intersection of today’s Bolesc, Bugaj and Rybaki streets.

After the Polish Golden Age (15th to mid-16th century), troubled times followed. After the Polish kingdom was wiped off the map of Europe in the 18th century, Polish elites tried, again and again, to bring Poland into being as an independent state, unfortunately unsuccessfully until 1918. Warsaw was always the most important city to conquer. Only those who owned Warsaw had a chance of success. And the Vistula always played the decisive role.

But then came an unpleasant period of forgetting – after the Second World War, people had to concentrate on other projects and so the Vistula became more and more the invisible border between Warsaw on the left and Praga on the opposite bank (where the stadium stands is Praga). After the Russians were thrown out of our beautiful country in 1990, for a long time there was no money for new investments in this part of the city – i.e. in Warsaw’s Vistula valley. Of course, there are beautiful pictures from the communist era where you see happy families splashing around. But you can’t take that so seriously. Most people in Warsaw had no contact with the river.

It was only in 2013 that investors understood the power of the Vistula and finally pumped several million euros into the revitalisation of the Royal River. For me personally, the river will have the most intensive influence on the cityscape and the attitude of the people of Warsaw in the coming years. I can’t yet say what exactly that means, but it is already very exciting.

Is it worth it?

Definitely! Especially in summer, when the nights allow it, I can only recommend sitting comfortably in a deck chair, enjoying a drink or a beer and the view. This is where the people of Warsaw sit to explore the finer things in life. It is not a party mile, but neither is it a barren landscape without flair. It is what one can imagine young Warsaw to be like – dynamic yet serene, young at any age and proud to be residents of this city.

What all belongs to the boulevard?

The boulevard stretches along the left bank of the Vistula for over 5 kilometres. There are three sections in total, all named after famous personalities. At the same time, each section has its own character and atmosphere. From north to south, these are the following sections:

The old town area stretches between the “Gdanski” and “Slasko-Dabrowski” bridges and is about 1.5 km long. It was reopened in 2015 after several years of renovation work. There is a mainland café and three boats with restaurant functions on this section. The atmosphere here is mostly very quiet and invites you to take a peaceful and relaxing walk.

There are three crossing points here. The middle crossing is at the level of the multimedia fountain, where water laser games are shown at weekends during the summer season. There is more about this on the following link:

The southernmost crossing is connected to the lower gardens of the Warsaw Royal Castle. If you walk around the castle, you will already reach the Castle Square and the Old Town.

The middle section is 1.9 km long and stretches between the “Slasko-Dabrowski” and “Poniatowskiego” bridges. While the northern section runs fairly close to the Old Town, this one is too far from the Royal Way to be reached comfortably on foot. The suitable access is the metro station “Centrum Nauki Kopernik”. If you get off here, there are numerous ways to pass the time.

At the station, there are numerous food trucks and boats where you can eat and drink properly. Just a few hundred metres away is Elektrownia Powisle, which will open in May 2020, with a food hall that can seat 200 people. There is also a bar, of course.

The atmosphere here is more geared towards a louder evening. There is also a lot going on here because of the metro station. So be prepared for large crowds. You can also choose between two routes here. If you go north (old town), it becomes emptier and quieter. After half an hour, you will reach the crossing at the level of the Royal Castle. If you go south (Czerniakowski Harbour), it is always more crowded and noisy. After half an hour, you reach the party section in the southern section of the boulevard.

This 900 m long section runs from Poniatowski Bridge to Czerniakowski Harbour. This part is known as a party mile with numerous bars, boats and partying. In between the hotspots, people sit on the concrete steps or on the beach at the southern end and “glow ahead”. The atmosphere here is very party-oriented.

Ideally, you use the tram on the Poniatowski Bridge for access. From the “Centrum” it’s three stops. If you end your evening at the southern end of the whole boulevard, we recommend taking a taxi from there.

You can see all the points and routes mentioned on our GoogleMaps city map.

Vistula Boulevard on the city map 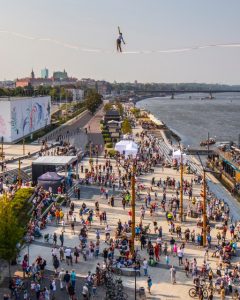 From 2013 onwards, the interest of the city and especially of large investors in this wild part of the city suddenly grew. It became clear that thousands of young people would like to spend their evenings here in the summer and would certainly like to leave their money here – if only such an opportunity existed. The groundbreaking ceremony for the reconstruction took place in 2013 and since then, season after season, the boulevard has become a real attraction for young and old, tourists and residents of Warsaw – there is enough space for everyone.

The first section at the level of the old town was opened in September 2015. The second section, further south (the middle section on the city map), was opened on 16 June 2017. The rest will also be renewed in the near future. It doesn’t mean that you can’t still lie there and enjoy life in peace. Paradoxically, the southern section is the most active and popular.

Pedestrian crossing over the Vistula

In 2017, it also became known that a pedestrian crossing is to be built in the middle of the boulevard (at the height of the Presidential Palace). This bridge will be about 400 metres long. At the moment, no more is known. In September 2017, the city will decide which architectural project has won. Completion is planned for 2020.