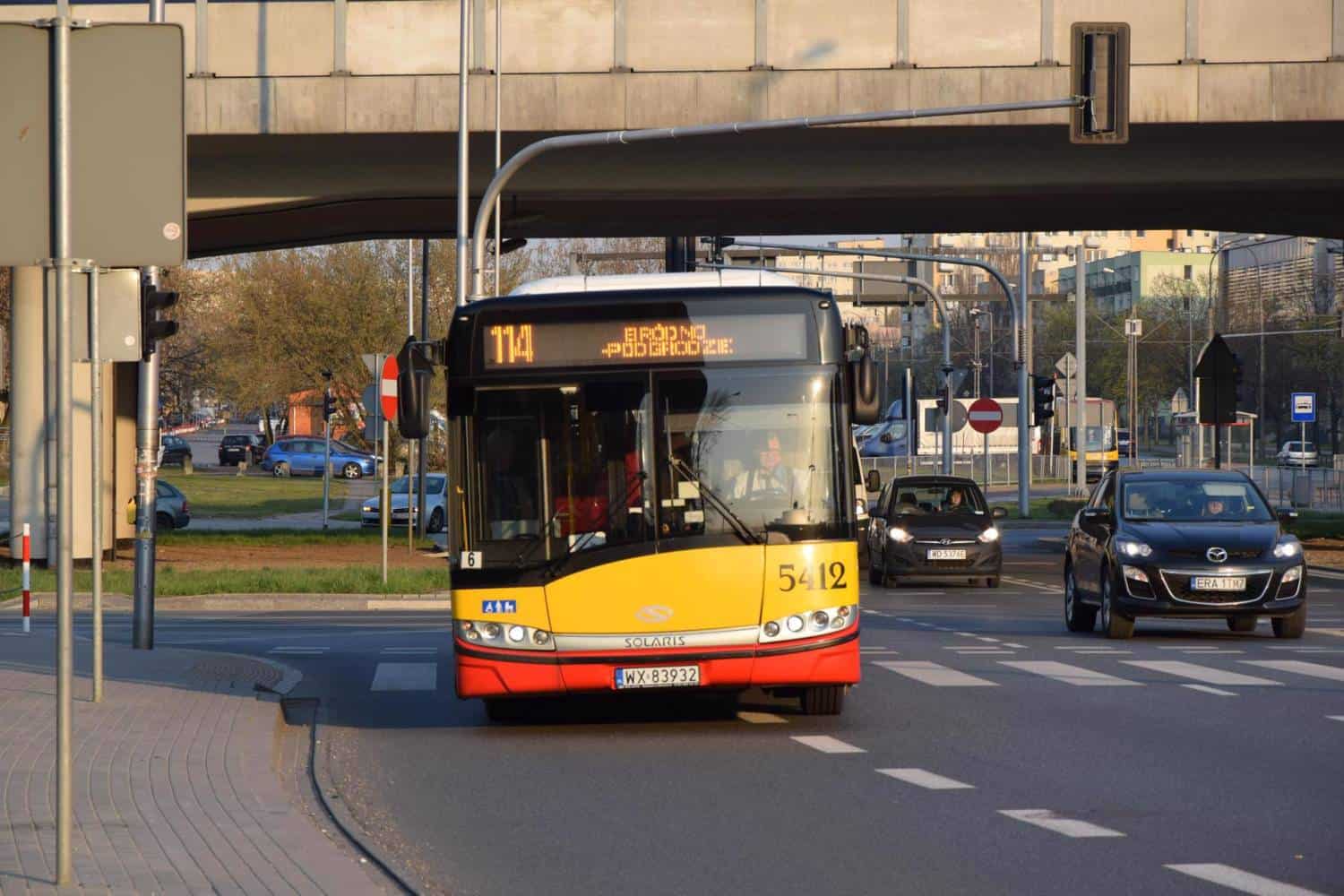 Public transport in Warsaw. The overview. 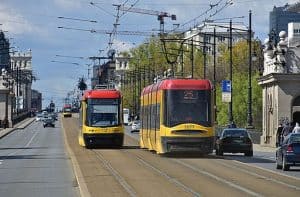 Warsaw’s public transport network is very well developed overall. Unfortunately, the underground rapid system (metro) is quite small and does not cover all tourist attractions and places. The bus and tram network is excellent but requires greater attention and some preparation because those stations are usually named after streets where they stop. It is therefore advisable to familiarise yourself with Warsaw’s public transport system in advance so as not to always have to rely on taxis, which would be quite expensive in the long run.

That is why we have written this exhaustive article on public transport. Everything about taxis can be found in a separate article.

At the bottom end of this overview, you have the opportunity to write your individual questions or comments, which we will be happy to answer. Of course, you can also use the general contact form.

The buses are marked with the numbers from 100 to 899, whereby the following division applies:

With buses, you can basically get anywhere and everywhere in Warsaw. The bus route network stretches like a spider web across the entire city. The normal routes operate from around 5:00 am to 11:00 pm. After that, night buses take over. There is a smooth transition. The starting point of the night buses is at the bus station at the Central Train Station opposite the entrance to the Golden Terraces shopping mall (Zlote Tarasy).

TIP: On some bus routes there are bus stops where the bus driver will only stop if you press the stop button first. If you want to be on the safe side, I would press the stop button before every desired stop. On the mostly digital timetables in the buses, these stops are marked with a circle without black filling.

Buses with a “Z” are substitute buses for stuck suburban and underground trains (Zapasowy = substitute).

PLEASE NOTE: During the summer season from May to October, from Friday evening 6 pm to Monday morning 8 am, the streets Krakowskie Przedmiescie and Nowy Swiat will be closed to car and bus traffic. The affected section starts at Castle Square in the Old Town and stretches south to the Rondo-Charle-de-Gaulle [GoogleMap]. The buses will circle the entire Royal Way in an arc. The replacement stops are never more than 400 metres from the actual line.

So don’t be surprised if the buses suddenly stop running on this section.

Punctuality of the buses

*Punctuality is measured by bus operator staff. A bus is on time if it departs in the time window from one minute before to three minutes after the scheduled time (source: TransportPubliczny / Polish).

The trams are numbered 1 to 79. Unlike the buses, the trams have to stop at every stop. The journey time starts at approx. 5:00 a.m. and ends at approx. 11 pm. However, there is no substitute for rail transport at night.

The tram network is no longer as well developed as the bus line network. But the trams always have priority and never gets stuck in traffic jams. This is especially crucial if you should be travelling during rush hour in the morning and evening.

Punctuality of the tram

* A tram is on time if it departs in the time window from one minute before to three minutes after the scheduled time (source: TransportPubliczny/Polish). 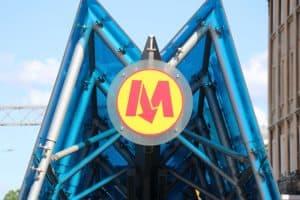 Logo of the metro in Warsaw

In Warsaw, the metro is called the Metro. There are two metro lines in Warsaw. Line M1 runs from north to south. Line M2, on the other hand, runs from east to west. Both lines cross at the station Swietokrzyska, which is located in the immediate vicinity of the Palace of Culture.

The metro provides easy access to the Vistula River, the two main promenades, Krakowskie Przedmiescie Street and Nowy Swiat Street, and the National Stadium on the other bank of the Vistula River in the Praga district. Many hotels are also close to the Centrum metro station. Unfortunately, the station is not yet connected to the metro network, but it is also only a five-minute walk from the Centrum metro station.

At the moment (2020), the metro is being extended towards the west and east. However, this is not of great importance for tourist traffic. The stations under construction are marked on the city map.

The topic was dealt with in a separate article (coming soon). 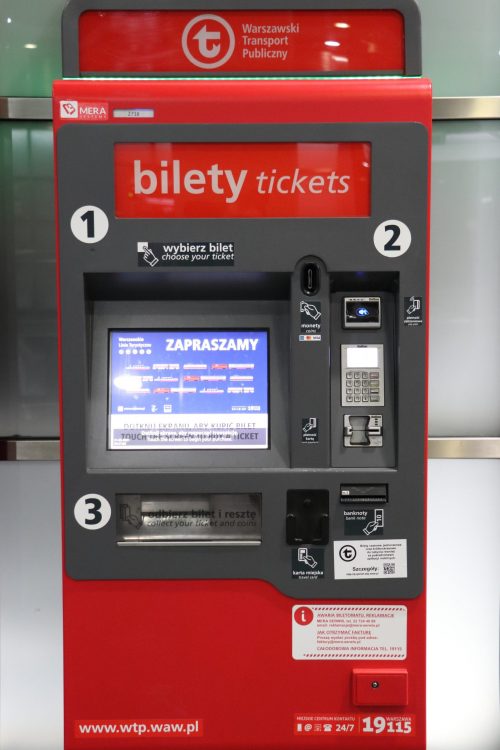 Ticket machine in the metro

You can buy tickets from kiosks, ticket machines or ticket counters, from the machines on buses and trams, and from the bus or tram driver. However, this is not always as easy as it may seem at first.Buying a ticket

At the kiosk and the ticket counter, it depends on luck how you are served. Behind the glass, especially at the kiosk, there are often people who tend not to exude any joie de vivre and who handle the purchase accordingly – often without words or eye contact. I can only advise you one thing in such situations: Squeeze your buttocks together and stay persistent. This is the only way to get what you want and maybe an answer to your question – but really only maybe.

I would also only buy tickets from bus and tram drivers if I really have to. Drivers have the right to refuse to sell tickets if road conditions do not allow it or if the vehicle is running late. You should also have small change ready because they often don’t have change.

In summary, therefore, use the ticket machines or ticket counters at railway stations first and foremost. Avoid the bus and tram drivers. There are always ticket machines in underground stations.

PLEASE NOTE: Tickets are valid for all means of public transport at the same time, i.e. bus, train and metro. You only have to stamp the ticket once. On the back of the ticket you can then check until when it is valid.

There are two ticket zones in Warsaw.

The administrative area of whole Warsaw is Zone 1, what means, that as a tourist there is no need to worry about the zones at all. Zone 2 begins at the boundaries of the city.