Here you can book a New Warsaw public tour (Budget City Tour) with a licensed city guide. Take a look at our overview and if you have any questions, please use the contact form at the bottom end.

We do not require any deposit

The meeting point is the main entrance of the 237 m high Palace of Culture and Science. You can recognise the entrance by the large columns and the inscription Palac Kultury.

The city guide holds a white umbrella in his hand.

On this tour, the guide will show you modern Warsaw. This is the first tour in Warsaw with this theme. This reticence on the part of providers and city guides is due to the fact that modernity found its way into Poland’s capital not so long ago. The 2012 European Championship, whose opening match was played in Warsaw’s National Stadium, is considered the beginning of the strong push towards modernity and progress.

The meeting place at the Palace of Culture was chosen for practical reasons. It is the most visible building and therefore easy to find. From there we head towards the Wola district, passing the tallest residential building in Europe, Zlota 44, and the tallest building in the EU, Varso Tower, in the immediate vicinity. This is followed by a walk through the former industrial area, where skyscrapers are being built next to old ruins. The contrasts could not be more visible. In the midst of this architectural chaos, you visit a modern residential building that has been connected to a piece of ghetto wall from 1943. The district was also the area of the Jewish ghetto from 1940 to 1943. The first part of the tour ends on the Rondo Daszynskiego with the highest density of skyscrapers.

We take the metro to Vistula Boulevard, the biggest hot spot for Warsaw residents and a lesser-known tourist corner. In the vicinity, there is the Copernicus Centre, the garden on the roof of the Warsaw University Library and Elektrownia Powisle, a shopping centre with a food hall for 600 people and an extremely well-stocked drink bar! There we end the tour.

You see a different Warsaw on this tour, which is not to discredit the other tours in any way. However, we also want people to realise that the Old Town alone is not the city’s landmark. To get to know a city, you have to go out and meet people. And with this tour, we can offer you that.

So let our city guides inspire you and show our city!

Palace of Culture and Science, the tallest residential building in Europe Zlota 44, skyscraper quarter with skyscrapers like Q22,(195m), Varso Tower (310m), Vistula Boulevard, Garden on the roof of the library of the University of Warsaw, Elektrownia Powisle (former electricity plant, which was converted into a night life hot spot) 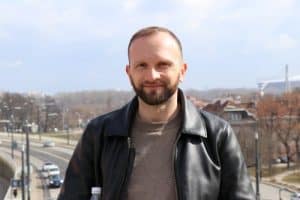 Antoni was born in Poland and grew up in Germany. He studied at the universities of Bielefeld and Warsaw and has lived permanently in Warsaw since 2013.  Since 2014 he has been guiding guests from all over the world through Warsaw as a licensed city guide and has been running his own tourism company Walking Warsaw since 2017.