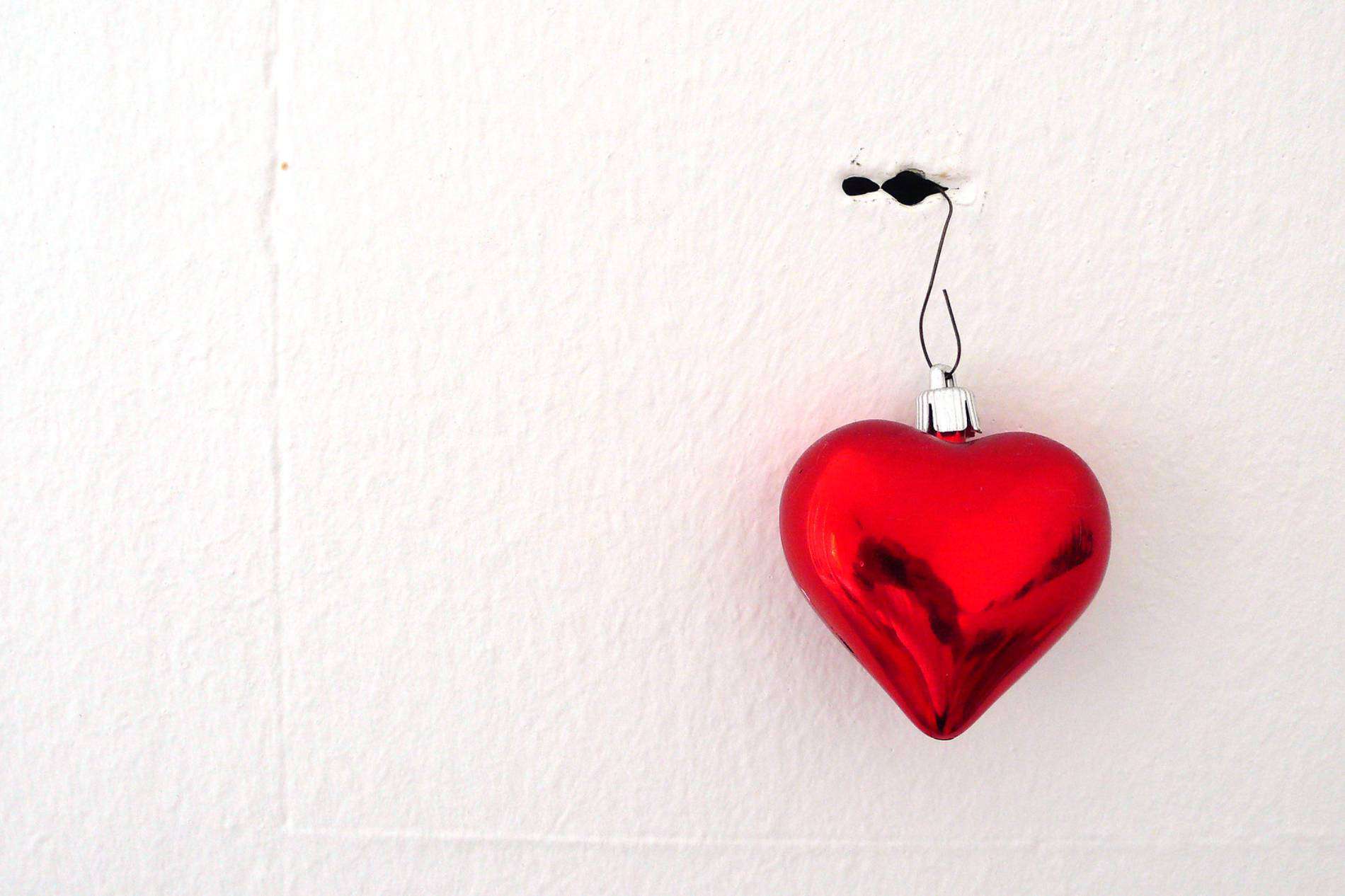 Frédéric on his deathbed 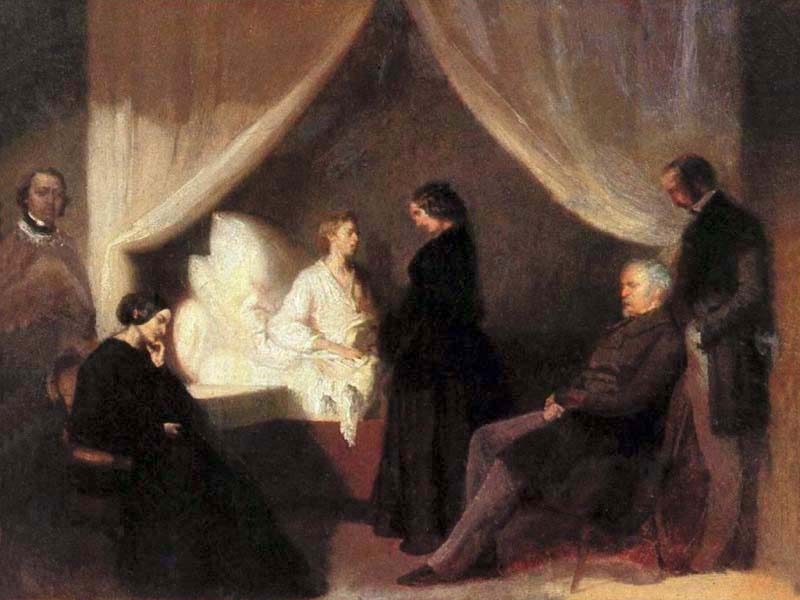 The musical genius was only 39 years old when he lay on his deathbed. Death did not take him abruptly. It took a relatively long time for him to give his last breath. All this time, Frédéric knew what was in store for him.

During this time, he settled his worldly affairs and even determined the musical setting for his funeral. Contrary to all the legends and rumours, the decision was also already made here that a quick post-mortem should be carried out after his death and that the heart should be taken out.

Why this hasty decision? Some thought that he was afraid of being buried alive. But in fact, he was concerned that in this way he could prove that he had died due to heart problems.

The heart and the cause of death

The autopsy was performed by the Paris surgeon Professor Jean Baptiste Cruveilhier, after whom Pégot-Cruveilhier-Baumgarten disease was named.

It turned out that Frédéric Chopin’s suspicions were not unfounded. The heart was so big that even the professor was amazed. Today we know that he could not have known about the disease, as it was not known at the time.

It took a while to learn more. In 2014, medical scientists got permission to take out the container with the heart from the pillar wall in the Holy Cross Church in Warsaw for research. The results were published in The American Journal of Medicine in 2017. The condition of the heart was very good. The container had only one leak, which could be closed with wax. The heart was not removed from the container for the examination but photographed with a special device. On the basis of the anatomical changes in the heart, it was thus possible to prove that Frédéric suffered from pericarditis and died of it. Such a disease is closely related to tuberculosis.

The pericardium is also called the pericardium (= surrounding the heart) and is a very thin covering of the heart. It consists of an inner leaf, which lies directly on the heart, and an outer leaf, which as a capsule surrounds, fixes and protects the heart in the thorax. A narrow fluid seam between the two leaves allows the heart to function with little friction (source: www.cardio-guide.com). Frédéric’s cause of death is known in medical terminology as pericarditis.

The next investigations will take place in about 50 years. It is hoped that technological advances in medicine will allow more precise examinations to be carried out in that time.

As early as 9 November 1849, the newspaper Kurier Warszawski announced that the heart of the most famous Pole would soon be in Warsaw.

But it was not so easy. His elder sister Ludwika Jędrzejewiczowa could not simply state what she was bringing as luggage. It would have been confiscated at the latest at the border into the Russian-occupied Polish territories. The Russian officials wanted to prevent the most famous Pole in Europe from making too much noise in the media.

So Ludwika had to smuggle the heart into Poland, hiding it under her clothes. At that time, people simply did not look at a lady there. We know it somewhat differently from the security checks at airports in the 21st century. Well hidden, it finally made it to Warsaw.

The heart, by the way, is soaked in alcohol. It is not known whether it is cognac or spirit. In most elaborations and contributions, cognac is indicated.

In the Church of the Holy Cross

While the container initially remained in Ludwika’s flat for a few weeks, a more dignified place was sought.

They finally decided on the largest church in Warsaw at the time – the Holy Cross Church on Krakowskie Przedmieście Street. This church had great significance for the Chopin family from the very beginning. Izabella and Emilia, Frédéric’s two younger sisters, were also baptised there.

However, the clergy initially stowed the urn … in the cellar. The reason? They knew about the pianist’s tempestuous life in Paris and therefore it was not allowed to be displayed in the upper, thus in a certain way sacred, part of the church.

So it took a while for some grass to grow over it. Only the next generation of clergy was prepared to take the heart out of the catacomb and display it in a visible place in the church. In the meantime, a good reason was found: the writer and friend of Chopin in Paris – Klementyna Hoffmannowa, née Tańska – was not particularly virtuous either and nevertheless her heart was placed in the cathedral on Wawel Hill in Krakow.

Hardly anyone knows that the container with Chopin’s heart was initially gathering dust in the cellars of the Church of the Holy Cross. The church’s administrators were aware of the musical genius’s frivolous life and did not want to incur God’s wrath. After all, the nave of the church is only for the most worthy of the dead. So some rain had to fall until the next generation of monastic brothers decided that the heart should be given a place of honour.

On 1 March 1879, the 69th anniversary of Frédéric Chopin’s birth, the heart was walled into the column. One year later, Leonard Marconi created the epitaph from Carrara marble, which can still be admired today.

By the way, the epitaph shows the date of birth as 22 February 1810, which was not engraved until 1935.  The exact date of birth has not been determined with certainty and we prefer to leave this scientific dispute about the actual date of birth to the historians. I’ll stick with 1 March, the most commonly given birthday.

During the Second World War

The Chopin Collection in Krakow

After the fourth partition of Poland between the Soviet Union and the German Reich, the Nazis incorporated some areas into the Reich, leaving others to the rule of terrorists and lunatics. In the so-called Generalgouvernement, absolute terror reigned, controlled and directed by the self-proclaimed King of Poland Hans Frank, who resided on Wawelberg in Krakow. Chopin music was strictly forbidden in this lawless country. Hans Frank, who even had a doctorate, hated the Poles, but this did not prevent him from acquiring a Chopin collection for 50,000 marks in November 1942. It was sold to him – probably under duress – by the Frenchman Edouard Ganche, who had been buying up Chopin memorabilia for many years. Interestingly, this collection was exhibited on 27 October 1943 by Gustaw Abb, the director of the Jagiellonian Library in Krakow.

On his orders, the Chopin monument in the Royal Lazienki Park in Warsaw was also destroyed on 31 May 1940. It was cut into pieces and melted down. One suspects that Hans Frank did not want this Pole near him, as the monument stood in the immediate vicinity of the Belvedere Palace, his residence during his stays in Warsaw.

The Chopin Heart during the Warsaw Uprising

The two short regressions were intended to remind us that the Polish cultural heritage was to be destroyed and annihilated. The Polish people were to be trampled underfoot and reduced to a medieval tribe. The war in Eastern Europe really began after the surrender.

The Warsaw Uprising of 1944 gave the young soldiers the opportunity to take revenge on their executioners. The Polish generals therefore gave the uprising free rein. However, the insurgents should have been told that the uprising was actually lost before it started. The destruction wrought by the German troops was atrocious. The punishment for the city and its population could only be compared to the destruction of Carthage by the Romans.

In the vicinity of the Church of the Holy Cross, fierce battles between the Warsaw insurgents and German troops had been taking place since the first days. The church was in danger of being completely destroyed.

And this is where the name Schultze /Schulze appears. Little is known about him, we don’t even know if he was a Catholic or Protestant clergyman. But he was a German priest. He offered the Polish priests to take the urn with Chopin’s heart personally to a safe place. Nothing is known about his motives. What is known, however, is his self-sacrifice for Polish priests in Warsaw. In addition, he saved numerous liturgical vessels of the Holy Cross Church from destruction, which the Charité sisters and the nuns of the Order of Visitants could confirm. So he should at least have his place in history here.

Lower part of the epitaph

On the subject of the urn with the heart, however, German officers also intervened. One of them was SS Lieutenant General Heinz Reinefarth, also known as the Executioner of Warsaw (as well as many others). It was to him that the urn was finally handed over. When this information was passed on to Erich von dem Bach-Zalewski, another SS general, he ordered the heart to be returned to its rightful owners. His motives remain a mystery to this day. Did he want to persuade Hans Frank to act? Or – as some claim – to convince the people of Warsaw of their goodwill towards the Poles so that they would fight alongside the German forces against the Russians who were waiting on the other side of the Vistula?

Erich von dem Bach-Zalewski finally invited Archbishop Antoni Szlagowski, who was staying outside Warsaw at the time, to Warsaw to receive the urn. The ceremonial handover was of course to be filmed for propaganda purposes, which did not happen due to lighting problems. Antoni Szlagowski then travelled back to Milanówek, where the urn was placed on the piano in the local rectory. It stood there until 17 October 1945.

Erich von dem Bach-Zalewski wanted to make up for filming the handover and staged it. The Polish clergy could only be seen from behind. It goes without saying that there were no Polish representatives there officially.

On 17 October 1945, the 96th anniversary of Frédéric Chopin’s death, the urn was first taken to the house where he was born in Żelazowa Wola. Only after some time did it find its way back to the Church of the Holy Cross in Warsaw.