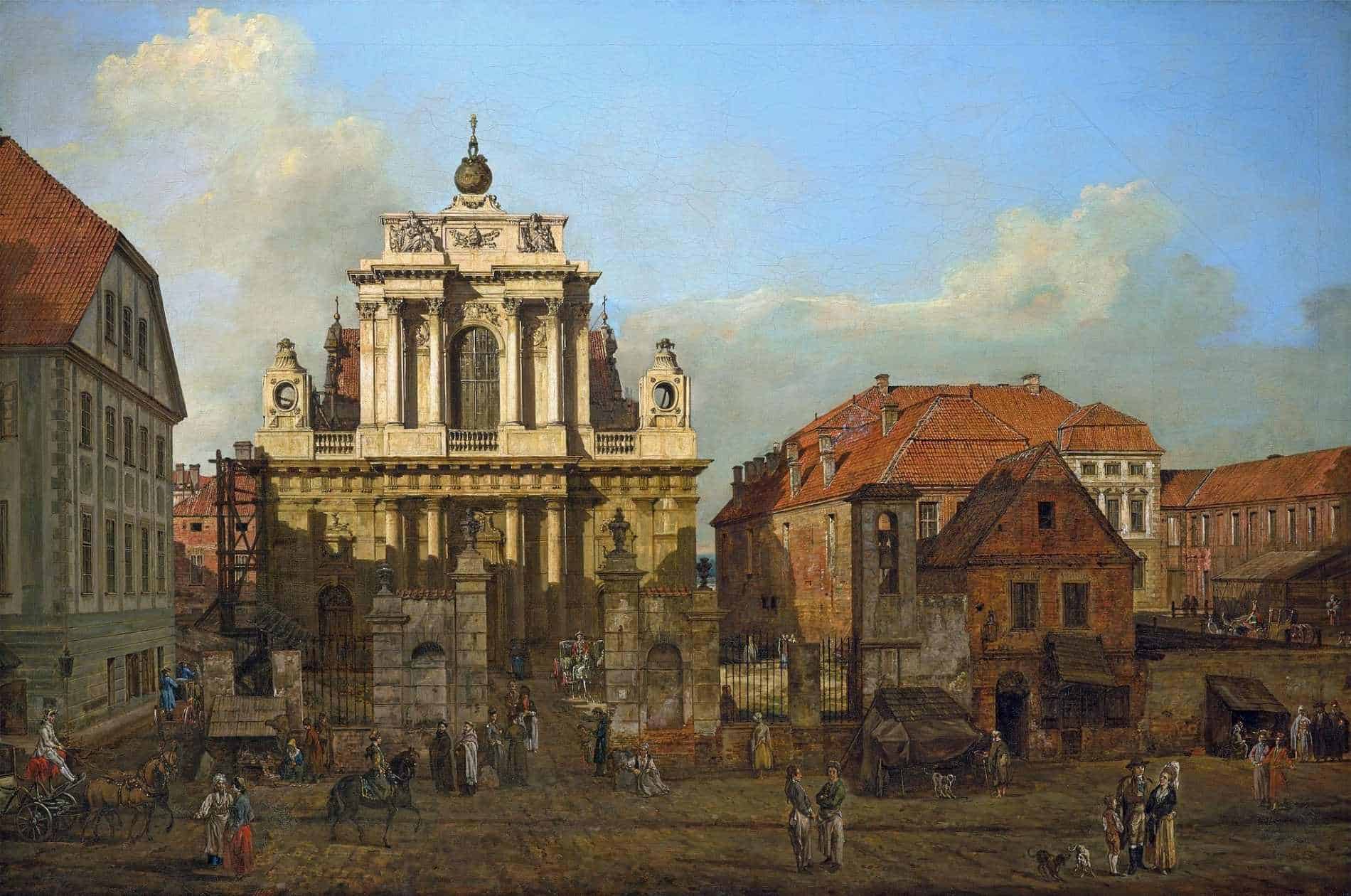 The Carmelite Church on the Royal Route

The following post is a detailed description of Carmelite Church in Warsaw. If you only need a touristic overview, please click on the following link.

The importance of history in Poland can be seen in the Carmelite Church in Warsaw. Although it is one of the most beautiful churches in Warsaw, it is rarely shown or mentioned by the people of Warsaw and local city guides. Historically, nothing worth mentioning has happened here. This is probably also the reason for the rather sparse number of documents about this place of worship.

So if you happen to be strolling along Krakowskie Przedmiesie Street (Royal Route) on your own, stop for a moment in front of this beautiful stone façade. In the meantime, we’ll tell you its story.

The church as a building

The official name is the Church of the Assumption of Mary and St. Joseph the Bridegroom.

The church building was built between 1661 and 1681, although history books often give 1643 as the year of completion. Even the order books record this exact year in their annals. It was most likely due to the lack of financial means that the construction dragged on.

Isidor Affaitati the Elder designed the project in Baroque style for the Discalced Carmelites, who settled in Warsaw in 1634. The Carmelite church was finally consecrated in 1716 by the clergyman Augustyn Wessel. Today the church belongs to the Metropolitan Higher Seminary in Warsaw (Wyższe Metropolitalne Seminarium Duchowne św. Jana Chrzciciela w Warszawie). This ecclesiastical college prepares priests for their spiritual ministry. This institution has existed without interruption for more than 300 years. The most famous graduate was the priest Jerzy Popiełuszko (1947-1984), who was murdered by the Polish security service.

From 1762-1780, Ephraim Schröger rebuilt the exterior façade, which had previously looked relatively poor, in the style of classicism. It is the first classical stone façade in the then Kingdom of Poland (part state of the Royal Republic of Poland-Lithuania).

In 1925, a library was added to the north side in neoclassical style. The architect was Konstanty Jakimowicz.

The building was not destroyed during World War 2 and from 1945 until the consecration of the rebuilt St John’s Cathedral in 1952 it took over the function of a cathedral without being a cathedral itself (concathedral). 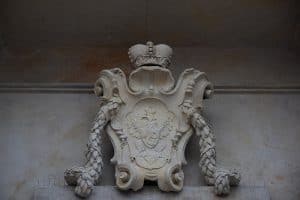 Coat of arms of the Radziwill family

While one can still clearly recognise the Baroque style in the interior, the exterior façade presents itself in the Classicist style with a few elements of the Baroque.

The main entrance was decorated with a greenish-black marble portal, above which is the coat of arms of the Radziwiłł magnate family. The Radziwill trumpets can be seen on a silver field with golden decorative fittings connected with mouthpieces (Trąba radziwiłłowska). The Radziwiłł family was the donor of the church façade.

Bell towers in the shape of incense burners can be seen above the façade on both sides. The bells inside date from 2000. At the same height are the figures of St. Teresa of Ávila (1515-1582) and Elijah (prophet; 9th century BC). Above their heads, medallions with their busts have been carved, stupidly the wrong way round.

Further up are figures with the following symbolism (from left to right):

The façade is crowned by a copper sphere on which an oplate is placed. The sphere is intertwined with the defeated serpent of evil. This makes the symbol of faith.

The Warsaw proverb “swell like the Carmelite vessel” (spuchnąć jak bania karmelicka) originated with this sphere.

There are 12 altars in the interior of the church.

Main altar of St. Joseph from the 18th century. Before that there were already two altars here. From the first altar, the painting of Joseph and the Christ Child remains. From the second, the figure of St. Theresa and St. John of the Cross. In addition, there are the columns. Above the altar crowns Gloria with the image of God and the globe, a work by Jan Jerzy Plersch.

In addition to the main altar, there are ten other altars, five on each side of the nave. Most of the altars are by Leon Sużyński from 1857.

The chapel with the tomb of Christ is right next to the presbytery designed by Henryk Marconi in 1862. The murals are by his son Karol Marconi, the altar by Adam Nowicki.

The pulpit dates from the 18th century. The author was probably Tylman van Gameren. On it are allegories of the four continents, the Assumption with a dove and the saints of the Carmelite Order.

First, the 18th century stucco in the presbytery (original) was renewed. During this work, three frescoes were discovered.

When the wall surfaces were painted, it was noticed that the church was initially to be built of sandstone. However, these walls are only 160 centimetres high, the rest was finished in brick.

This was followed by the refurbishment of the wooden pews and the installation of underfloor heating.

In 2012, the altar of St. Joseph was renovated. Behind the altar, another fresco from the 2nd half of the 17th century, i.e. from the first construction phase, was found. The fresco was not finished because the Polish-Swedish war interrupted the construction work. Another surprise was found between the two main altars. A choir emerged in which two old choir stalls were still preserved. However, these were not intended for renovation and will have to wait due to lack of funds.

The crypts are also being renovated. At the moment, excavation work is taking place there, as there are numerous skeletons.

The Order of the Discalced Carmelites

The Carmelites came to Poland in 1617 and to Warsaw as early as 1634. Their main task was to teach the inhabitants of the surrounding city. This seems all the more strange when one considers that this order was subject to enclosure.

After the January Uprising of 1864, the order was dissolved and the building handed over to the seminary.

There is, however, one small story connected with the Carmelite Church in Warsaw. On 1 September 1705, negotiations on the final peace between Poland and Sweden began in this building. Stanisław Leszczyński and Charles XIII took part in the talks. On 18 November the peace was signed.

There was a lot going on in the Church during these months. So it had its – albeit very unfortunate – five minutes.

Moreover, the main actors are not particularly popular in Polish history, which may have led to the deliberate forgetting of this event. 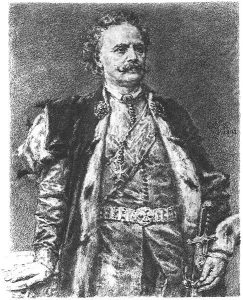 He was born in Lviv (Lwów / Lviv, today Ukraine, then Kingdom of Poland) and was the only person to have been King of Poland twice. First from 1704 to 1709 and finally from 1733 to 1736. In 1705, the first Polish royal coronation outside Krakow took place in St John’s Cathedral, then still a simple parish church. The second and last was the coronation of the last Polish king, Stanisław August Poniatowski.

During the Civil War of 1704-1706, Swedish troops occupied the Polish capital Warsaw. The Polish nobility deposed August II the Strong (elected in 1697 as Frederick August I Elector and Duke of Saxony) in 1706. Only when the Swedes suffered a heavy defeat at the Battle of Poltava against Russia did they withdraw from Poland. Stanisław Leszczyński then fled from Poland to Sweden.

When Augustus the Strong died in 1733, the whole story started again. The two political camps of Stanisław Leszczyński on the one hand and those of August III on the other fought over the Polish crown.

He spent the rest of his life as lord of Lorraine. The largest square in Nancy is still called Place Stanislas.

His actions were always directed against the Kingdom of Poland and caused great political and economic damage.